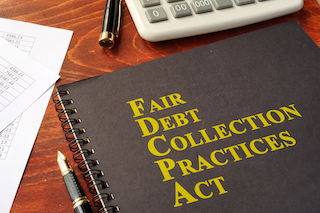 As we enter the spring of 2018, the Fair Debt Collection Practices Act, or FDCPA, remains an important legal protection for consumers who are dealing with debt collectors.

Due to its importance, our free Consumer Guide to Good Credit has valuable information about the FDCPA.

The FDCPA was passed in 1977 to restrict abusive activity by debt collectors. It covers the activity of anyone who collects debts owed to another party—that means it doesn’t apply directly to the original creditor, but only to 3rd parties working to collect debts on the creditor’s behalf.  Also exempt from FDCPA coverage are any debts owed by businesses—the FDCPA law protects individuals and families with personal debt, not businesses or even sole proprietorships.

The law has many restrictions on collector behavior, including:

Here is the full text of the actual law.

The Consumer Financial Protection Bureau (CFPB) has oversight of the FDCPA, and the Federal Trade Commission enforces the law. In reality, the primary way collectors are punished for violating the law is through lawsuits. Consumers can be awarded legal fees and a $1,000 fine from the collector or agency if they can prove in court the FDCPA was violated. That is on top of actual financial damages that may have been caused by illegal collection activity.

PLEASE NOTE: if you think you have been a victim of an FDCPA violation, seek the services of a qualified attorney. Credit.org does not provide legal services or offer legal advice.

Changes to the FDCPA

Over the years the FDCPA has been subject to interpretation by courts and the FTC’s interpretation of the law. But since 2011, the CFPB is responsible for interpreting the FDCPA and issuing advisories about the law and its enforcement.

The first big amendments to the FDCPA happened in 1986 when lawyers were included in the law as “debt collectors” when they conduct debt collection activities. Ten years later, the official notice collectors are required to send to consumers was amended by Congress, and the law changed to require notification only in the initial communication by the creditor to the consumer. Then 10 years after that in 2006, the FDCPA was changed again to specifically exempt government agencies from the law, including third parties working with government agencies to collect debts from bad checks and the like.

As we move into 2018, the law remains a strong protection for consumers, however, at over 40 years since inception, it is showing its age. For example, the fine for violations remains the same $1,000 it was in 1977. Had that amount kept up with the rate of inflation, the fine should now be over $4,000.

Another issue is raised by the Henson v. Santander Consumer USA decision. The collection type model employed in that case seems in part designed to circumvent the FDCPA; the collector buys the debt at a reduced price from the creditor and then attempts to collect. Since they now own the debt, they aren’t considered a 3rd party collector under the law. The Supreme Court even indicated in its decision on that case that Congress should revisit the law to respond to the new business models, such as the sale of debt, that have arisen since the original legislation was drafted.

Another development in 2018 is the Consumer Financial Protection Bureau is under new management. The Bureau had previously issued a rule, stating:

“Debt collection continues to be a top source of complaints to the Bureau. The Bureau has also received encouragement from industry to engage in rulemaking to resolve conflicts in case law and address issues of concern under the Fair Debt Collection Practices Act (FDCPA), such as the application of the FDCPA to modern communication technologies under the 40-year-old statute.

“…the Bureau has now decided to issue a proposed rule concerning FDCPA collectors’ communications practices and consumer disclosures. The Bureau intends to follow up separately at a later time about concerns regarding information flows between creditors and FDCPA collectors and about potential rules to govern creditors that collect their own debts.”

Since the CFPB issued that statement in Fall 2017, the leadership of the bureau changed. There was an announcement planned for February 2018 about these matters that was subsequently postponed. We will have to wait to see if the current CFPB leadership addresses these issues, and what stance they will take.

The issue they seemed most concerned with is how to regulate collector communication with consumers using a law that was written well before the Internet came into being.

These kinds of issues have come up before; the law makes it clear that collectors can’t disclose info about the debt to unauthorized third parties. So when answering machines became popular, the court had to decide how to interpret the law, which was written before most people had telephone answering machines. Naturally, leaving an audio recording on an answering machine was seen as a “communication” by the courts, so collectors could not disclose things that would violate the FDCPA, since they can’t know who may be listening when the answering machine tape is played. Current cell phone voicemail is considered private enough for collectors to use without violating the FDCPA, though obviously leaving abusive or harassing messages would clearly break the law.

Also at issue could be the use of social media to collect debts, which often veers into debt shaming.

While the Federal law only applies to 3rd parties collecting personal debts, some state laws apply protections similar to the FDCPA to original creditors.

Our corporate headquarters state of California is one such state, where debt collection laws restrict original creditors in similar ways to the FDCPA’s treatment of third-party collectors.

Call us today for a debt coaching session where we’ll help evaluate your debt situation and help you craft a reasonable and achievable financial plan.